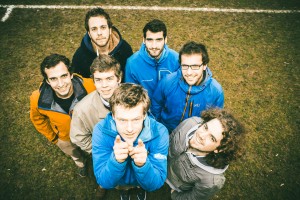 Alban founded AWOF together with Gilles in 2011. He took part at the 2012 AWOF world tour and realized the “Olho do Brasil” documentary in 2014. Alban also has professional experience in the field of international relations and development. He is now the President of the A World of Football association.

“Since four years, I have been coaching a … women’s football team”.

Gilles is co-founder of AWOF and took part at the 2012 AWOF world tour. Recently he realized the “Olho do Brasil” documentary during the last World Cup in Brazil. In his young years, he used to work as a sport instructor for socially deprived. He is AWOF’s sound expert and vice-President.

“I define myself as the typical striker of the 21st century… despite my very low number of goals in my different teams.”

Antoine took part at the 2012 AWOF world tour as communication manager. Football has always been a family passion as he used to watch every home game in the stadium of Standard de Liège with his father and grandfather. Currently living in Brussels, he is now a teacher for young kids coming from sensitive backgrounds.

“I am the valorous defender of my team. My major asset? Definitely my impressive physical abilities… However, last season we conceded 86 goals… in 20 games!”

Sean has a degree of cameraman/editor and studied a year at INRACI in Brussels. Just like the three others, he took part at the 2012 AWOF world tour as creative director. He has a lot of experience in filming documentaries on political or social issues in Europe. What he likes the most about football? The warm atmosphere of a stadium!

“I am really good at scoring amazing goals from 30 yards after having dribbled 3 opponents… but only on video games.”

TEAM ON THE GROUND

Aurian graduated from a Master in Bio-Engineering. Always willing to help, he managed summer camps for children. As a real football passionate, he started different football teams.

With Wauthier, we started a team in an amateur league 3 years ago. Last year, we ended runner-up… starting from the bottom.

Matthias has a Master in International Management. He started football when he was 4 … And never quit ! He organized a social project in Bosnia and Herzegovina to help a deprived local school.

Despite the fact that I have been playing football for more than 20 years, I am still in the lowest Belgian division.

Wauthier finished a Master in Law. Fond of sports and caring for social inequalities, he used to organize several activities for children from the court.

As a central forward in my amateur team, I fail to score… Even my last three penalty kicks!

Joachim graduated with high honours from INRACI in cinematography techniques (orientation video editing). He has been involved for several years in an organization to provide better guidance for local children in his neighborhood.

The last time he played football, he touched the ball 3 times during the 90 minutes game.