In advance, many thanks for your support!! The entire project description is developed on this page. Before doing anything, please check the less than 2 minutes video below!

You can process your donation through a classic wire transfer on the following bank account : BE92 3631 4207 4223 (Card holder: A World of Football ASBL; BIC code: BBRU BE BB), by mentioning “your email address AWOF2015 ”

Buddhist monks playing football in the Himalayas, ex-child soldiers reintegrated into the society in 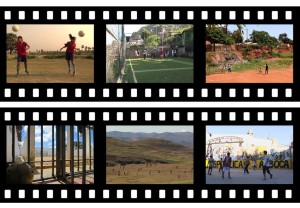 Uganda and even an entire Syrian refugee camp organized around football? These are the kind of documentaries that A World Of Football is working on!

The AWOF 2015 team is proud to introduce you their first documentary of the crucial role of football in a Syrian refugee camp!

This is just a start, and we really need you to bring this project to its ultimate potential!

THIS IS NOT OUR VISION OF FOOTBALL! For us, football is, and always will be, a sport played every day by millions of people. A sport that helps young people, on and off the fields, all around the world. A lot of organizations promote the social power of football, but they remain unknown because of their non-profit aspect. We are here to change that!

Through a series of nine documentaries in the most sensitive and retired places on earth, we will show how local initiatives use football as a tool for reintegration, development and even peace!

Travel with us across our destinations and subjects :

A World of Football (AWOF) is a young organization created three years ago by 4 ambitious and talented young Belgians. Given its success, the founders decided to expand and here we are, working on a new project.

Besides our passion for football, we also believe that football has the unique power to bring together and unite people of different races, cultures and religions in spite of borders, languages, income differences and even wars.

But maybe you hate football?? You find it disgusting because it is tarnished by all the money and scandals.

Well, you might be partly right…But we do not want to highlight this side of football. No, we will share the values of the football that we love so much which is the ‘street football’, the football played by 99,99% of all football players on the planet! And as the number 1 sport on earth, we are more than convinced that this is also an incredible social vector.

Still not convinced? Well, watch these two short documentaries… And tell us what you think about it!

Football as a peace vector between   Palestinian and Israeli children (4min46)

Football as a prevention tool for HIV in South-Africa (5min25)

Other sensational stories about social football can be discovered on our Videos.

The crowdfunding campaign is part of a global budget plan of 65.000 €.

Of course, the realization of those documentaries is an ambitious project that remains a real budgetary challenge for our small non-profit organization. Especially since the large broadcasting of its message requires an end product of high quality. This is why we really need your help to carry out this amazing project!

How will the collected money raised by the crowdfunding campaign help us?

On behalf of the whole team,

THANK YOU VERY MUCH DEAR CROWDFUNDERS!!!

You can process your donation through a classic wire transfer on the following bank account : BE92 3631 4207 4223 (Card holder: A World of Football ASBL; BIC code: BBRU BE BB), by mentioning “your email address AWOF2015 ”.